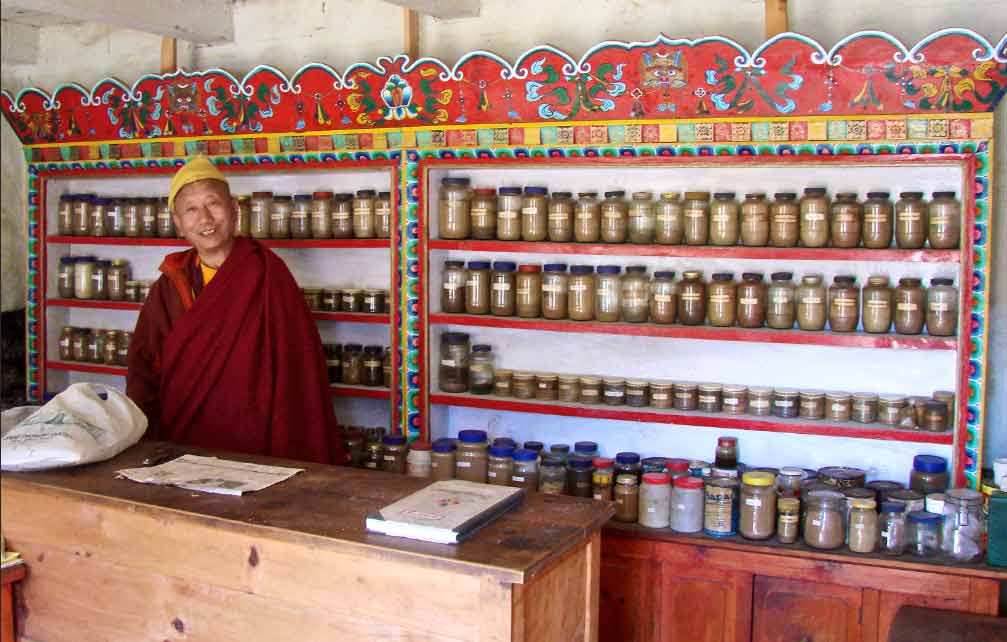 Many of us have benefited from the herbal medicines prepared by the clinic attached to Triten Norbutse Monastery but perhaps not so many know the history of this medical school.

The first medical school and clinic were actually established back In 1987 in the refugee settlement of Dhorpatan, Nepal at the request of Yongdzin Rinpoche and 33rd Menri Tridzin Rinpoche by Dr. Tsultrim Sanggye.

This area has recently been attacked by locusts that have destroyed the villagers’ potato crops and maybe some precious herbs, too. Please help us send them food and other essentials.

Tsultrim Sanggye was born in East Tibet and comes from a long line of doctors. When he was thirteen he began studying traditional Tibetan medicine with Sherab Tenzin from Nagshö, Kalzang Norbu from Ngala and Yundrung Lhagyal from Bartha. When the Chinese invaded Tibet, Tsultrim Sanggye was captured, held for many years and forced to work in a labour camp, where he lost one arm. He eventually escaped and made his way to the new Menri Monastery in India where he took vows and studied Tantra and Dzogchen under Yongdzin Rinpoche and 33rd Menri Tridzin Rinpoche. In 1987 his two teachers asked him to go to Dhorpatan as chief physician for the Abbot of Tashi Geggye Thatenling, Sonam Gyaltsen. There Dr. Tsultrim Sanggye – or Amchi Gegen as he was fondly known – established the School of the Four Medical Sciences of the Early Tradition as well as a clinic to treat the villagers, both Nepali and Tibetan.

In 2004, at the request of Khenpo Tenpa Yungdrung, Carol and Dmitry spent many hours with Amchi Gegen, a senior medical student and two geshes in Triten Norbutse Monastery translating the Table of Contents of Sorig Bumzhi, the Four Medical Tantras of the Yungdrung Bön tradition. We put together an official dossier, including the school curriculum, that would form the basis of the official application presented to the Nepali Government as well as to international sponsors for the new medical school and clinic within the monastery grounds.

Official permission was granted, sponsors were found, and 16 years later the School of the Four Medicine Sciences of Early Tradition is flourishing in Kathmandu. Countless patients have been treated and several young doctors are now studying for their advanced qualification.

Many of us have recently benefited from the compassionate work of these students who devoted their time and energy to preparing 300 protective medicine pouches specifically for Western Bönpos and our families.

This year the villagers really need our help. Their potato crops have been destroyed by locusts and unless we help, the people of Dhorpatan will be left without food for the winter or seed potatoes for next year’s crop. In collaboration with Triten Norbutse Monastery, FPYB is running a fundraising campaign to buy food and other essentials for our friends in this remote area of Nepal. Thanks to your generosity, we have already raised almost £2000. Please continue to give generously.