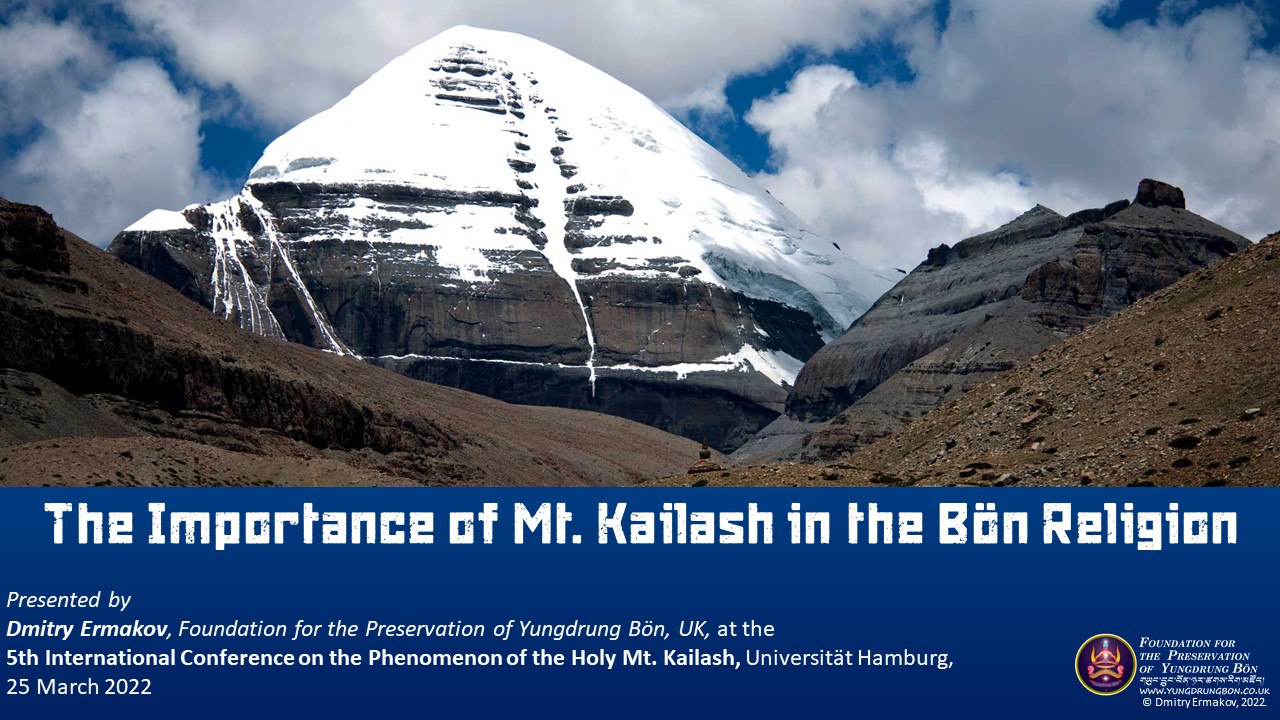 The Importance of Mt. Kailash in the Bön Religion

Presented by Dmitry Ermakov, Foundation for the Preservation of Yungdrung Bön, UK, at the 5th International Conference on the Phenomenon of the Holy Mt. Kailash, Universitӓt Hamburg, 25 March 2022.

Abstract:
Being the most important sacred geographical feature of Zhang Zhung and Tibet, Mt. Kailash was venerated by Bönpos of various creeds from times immemorial. In this talk I will firstly give a brief discourse on the four types of Bön religions to set the scene. I will then examine how the Dhami tradition of Humla, Nepal is connected to the Kailash region. The rest of the talk will focus on the role Mt. Kailash plays in Yungdrung Bön teachings and history: the meaning of its name in the Zhang Zhung language; Mt. Kailash and Lake Mapang as la-receptacles of Zhang Zhung emperors and the people of Zhang Zhung and Tibet; the Buddha Tönpa Shenrab connection; Mt. Kailash in the context of Bönpo Tantra; the extermination of Ligmincha royal line and Srongtsen Gampo’s conquest of Zhang Zhung, and Trisong Deutsen’s Cultural Revolution; Dzogchen masters Tapihritsa and Nangzher Lödpo and the first restoration of Bön; destruction of Bön by Hla Lama Yeshe Wö in Ngari; the survival of Zhang Zhung Nyengyu in Western Tibet and its spread to Dölpo and Mustang; and finally, the return and restoration of Yungdrung Bön around Mt. Kailash in recent times. 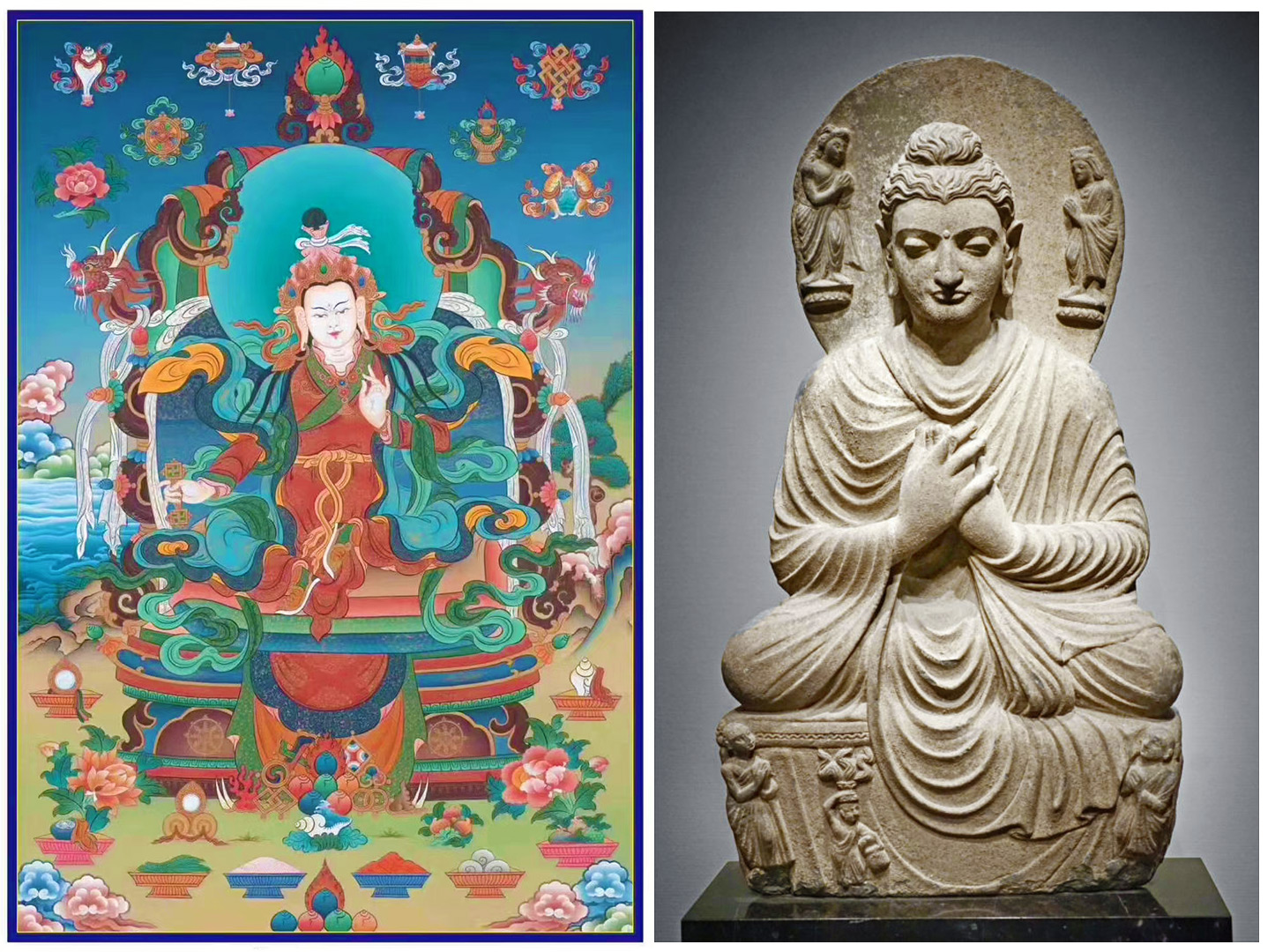 Before Tönpa Shenrab descended to this planet, he was in the Deva Loka palace.[5] There, he had a very special disciple called Hlabu Dampa Tog Karpo,[6] Son of Gods, Sage with a Crystal Head-ornament. This disciple was a previous incarnation of Buddha Shakyamuni. At that time, heretics[7] were destroying human health and wealth on Earth so there was a lot of suffering. Tönpa Shenrab saw the connection between the spread of false teaching and the human suffering, and he saw he was able to control it through his first disciple. So Tönpa Shenrab ordered Hlabu Dampa Togkar to go to India. That was the centre from where the heretic teachings spread.

I will explain briefly what my religion, Yungdrung Bön, is. Generally, the name Bön is very popular in Tibetan indigenous culture and religion, but there are three completely different aspects within this name.

The Magical Duel between Milarepa and Naro Bönchung: Who Really Won?

Presented by
Dmitry Ermakov, Foundation for the Preservation of Yungdrung Bön, UK, at the 5th International Conference on the Phenomenon of the Holy Mt. Kailash, Universitӓt Hamburg, 26th March 2022.

Abstract:
Probably everyone who has even a little interest in Tibet knows or has at least heard of the magical contest between Buddhist yogi Milarepa and Bönpo sorcerer Naro Bönchung. The tale has been told and retold for centuries. But does this story have any grounding in real events? Did this magical duel really happen on Mount Kailash? And who was the real winner? I will attempt to answer these questions by looking into Bönpo and Buddhist sources on Milarepa, recent comparative studies on Milarepa’s hagiographies as well as by referring to oral traditions of Gurungs and Tamangs of Nepal.

How the Teachings of Yungdrung Bön came to Tibet 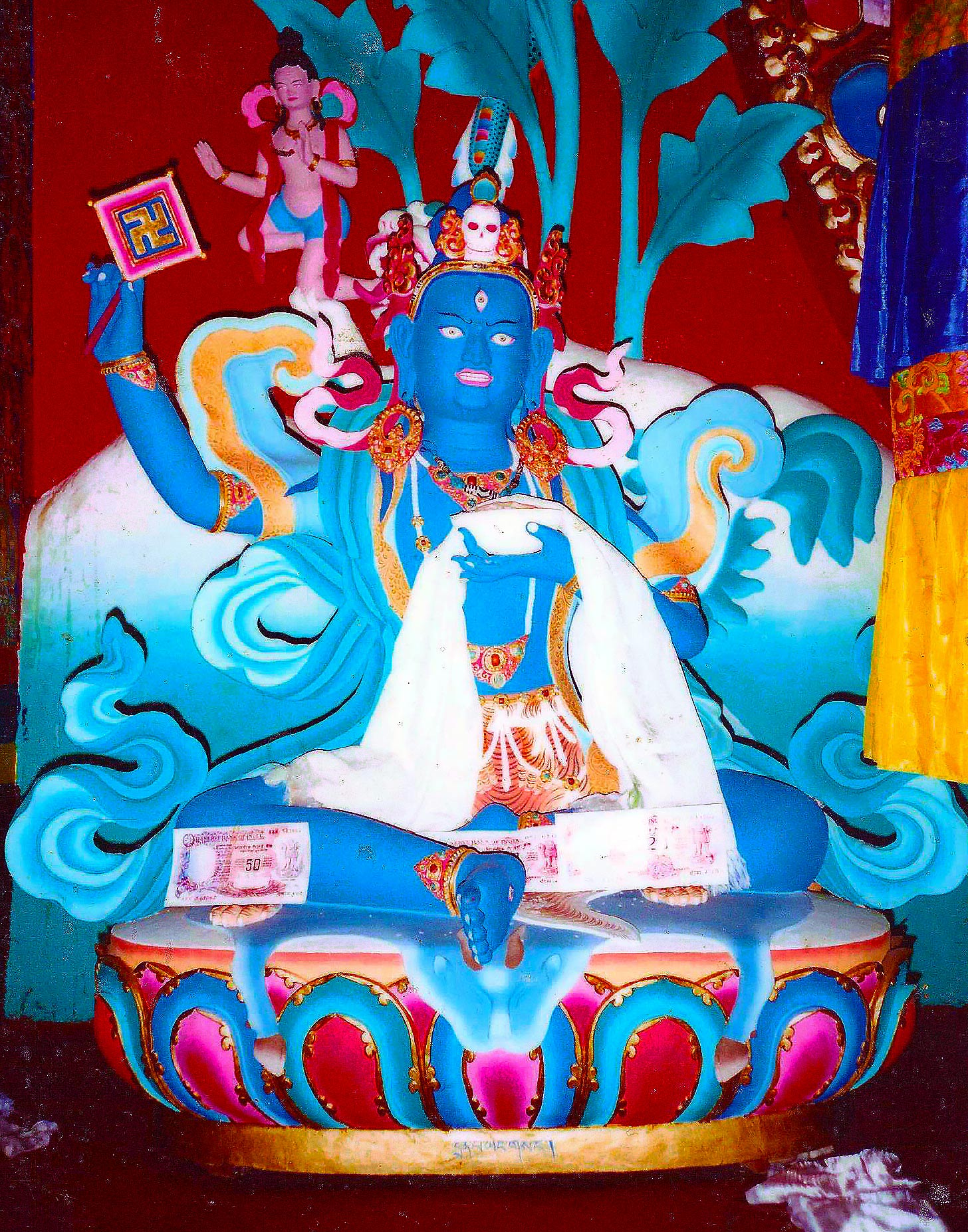 In this article, we will take a brief excursion into the story of Drenpa Namkha, one of the most famous and powerful masters in Yungdrung Bön. According to Yungdrung Bön sources, there were three major emanations of Drenpa Namkha throughout history, and all were great yogis and scholars. The later two, Drenpa Namkha of Zhang Zhung and Tibetan Drenpa Namkha, are both renowned for preserving the Yungdrung Bön teachings in times of persecution and bear the title The Defender (of the Teachings) in the Degenerate Age. 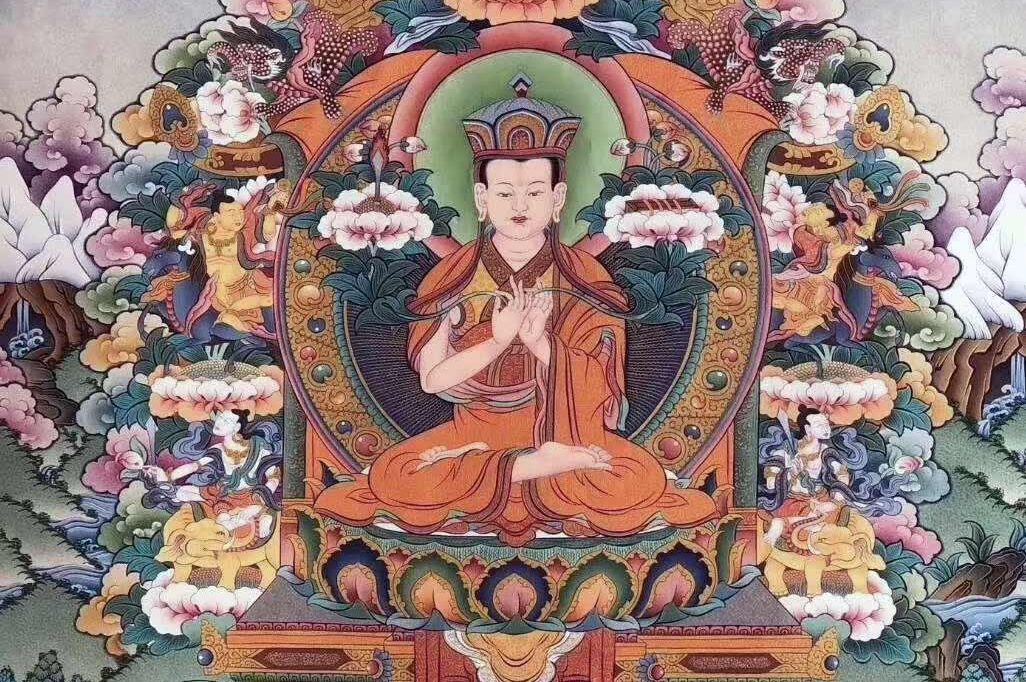 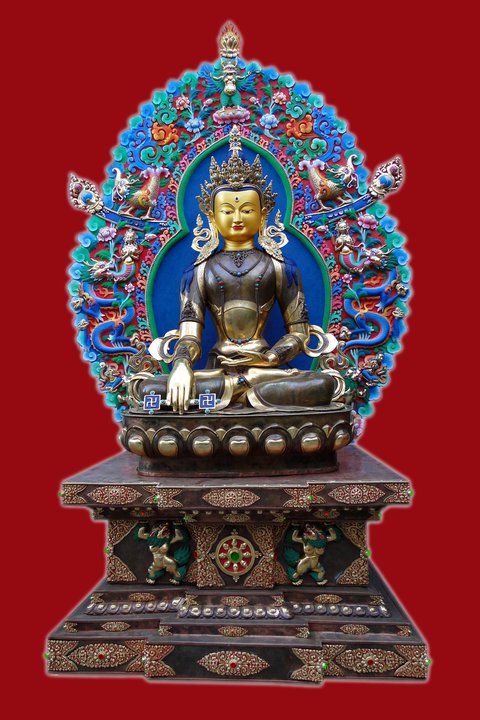 by Dmitry Ermakov
from
Masters of the Zhang Zhung Nyengyud:
Pith Instructions from the Experiential Transmission of Bönpo Dzogchen

The swastika has been used as a symbol of good luck, happiness and truth by very diverse cultures in many locations all over the globe since prehistory. Today it can still be seen throughout Asia as a symbol of general good luck. However, this ancient symbol has been much maligned.

– Swastika as a solar symbol

– Swastika in the Prehistoric Bön of Eurasia and Bө Murgel

Excerpted from D. Ermakov, Bön, written for the Encyclopaedia of Buddhist Philosophy (2011).
Translated from Russian by C. Ermakova.

Bön is a complex phenomenon which was once spread far beyond Tibet, but do its origins lie beyond the Tibetan Plateau? I shall examine this by looking at certain cultural phenomena.
Firstly, I would argue there are four types of Bön: gdod ma’i bon, g.yung drung bon, bon gsar ma and what I have dubbed Mixed Bön, which comprises a conglomeration of the first three types along with various elements from other religions.
Secondly, I take a closer look at the Deer Cult which was common throughout Eurasia from Palaeolithic times until today using archaeological evidence such as Deer Stones as well as myths and ritual costumes from France, the Caucuses, South Siberia, Mongolia, Amdo and West Tibet to demonstrate the importance of the Sky Deer. I then relate this to the Bon culture of Zhang Zhung, in particular to the smrang from a g.yang ‘gug ritual.
Having established possible routes this cross-pollination of ideas and cultural mores may have taken to and from Tibet, I move onto the question of whether Bon mdo sngags gsems gsum may also have originated outside Tibet. In view of the lack of textual evidence, I base my argument on concrete archaeological finds, namely rock carvings of stupas/mchod rten found in Gilgit and Ladakh. I then compare these with the depictions of Bönpo mchod rten described in gZi brjid.
In the light of the breadth and depth of the Bön tradition, a multi-disciplinarian approach is needed to better understand this multifaceted phenomenon and its multiple origins. 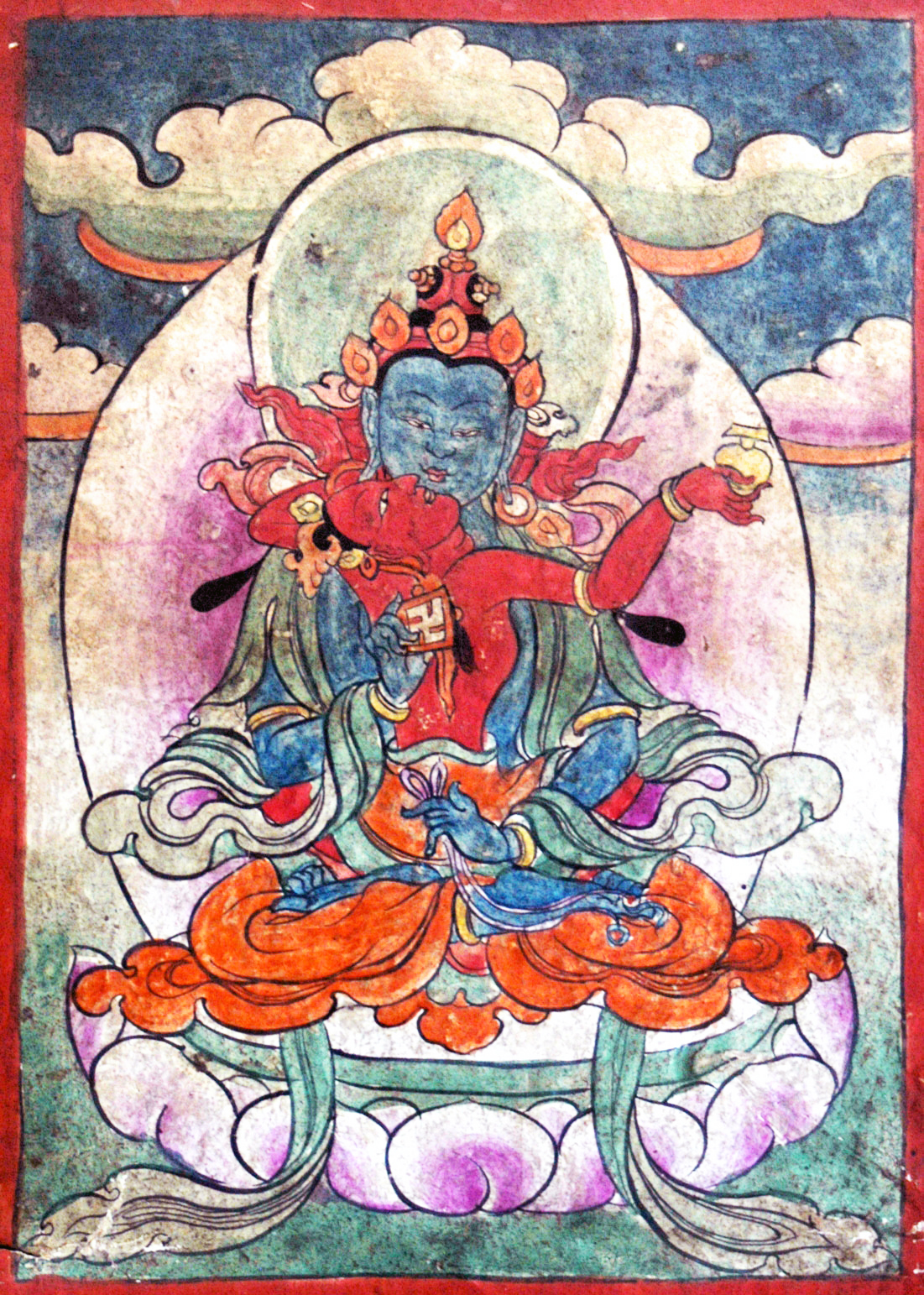 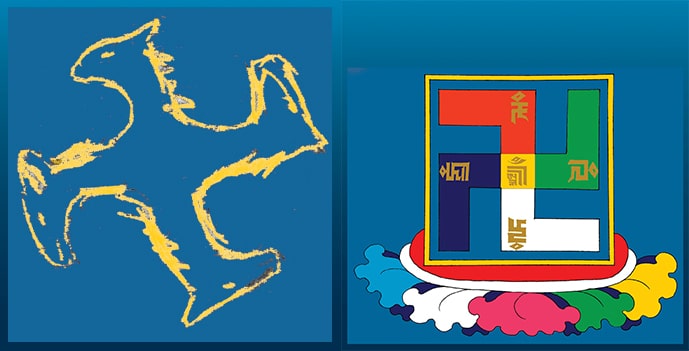 阅读文章
This page is under copyright so you cannot copy content