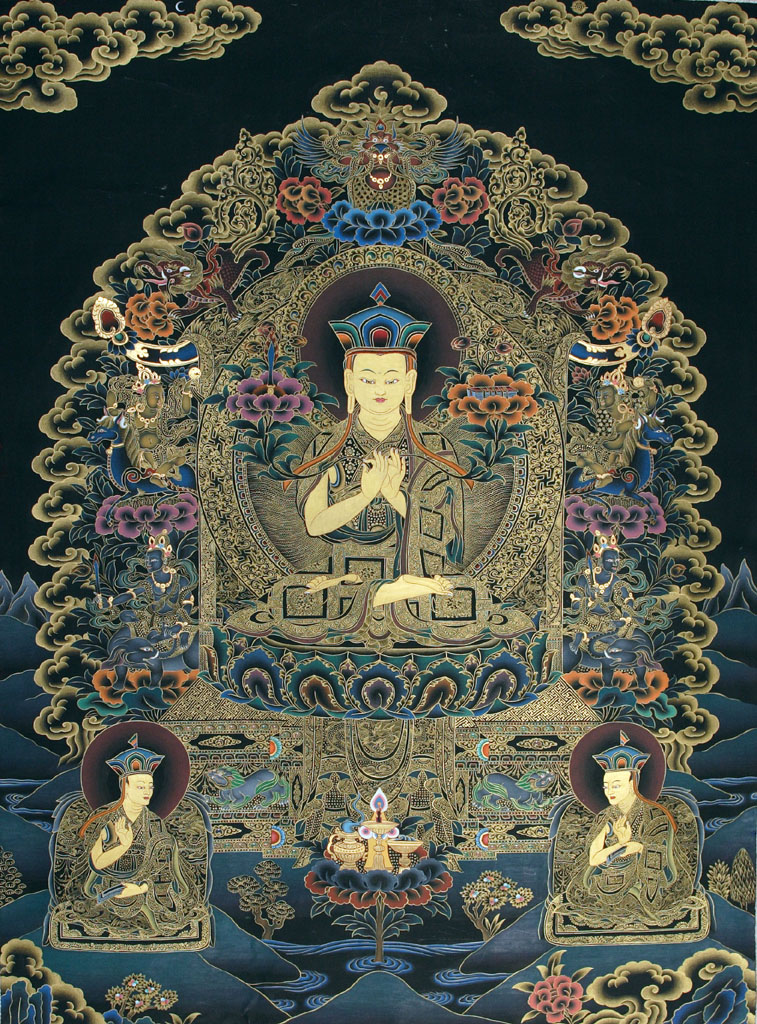 Nyamme Sherab Gyaltsen was born into the Dra clan (Tib. Dbra) in Tegchyog (Tib. Steg-skyog) in Eastern Tibet. His father was Lugyal (Tib. Klu-rgyal) and his mother was Rinchenmen (Tib. Rin-chen-sman). He studied with a vast array of accomplished masters, both Bönpo and Buddhist, and became known far and wide as a great Rabjyampa (Tib. rab-‘byams-pa) because he defeated numerous and knowledgeable opponents in philosophical debates. He perfectly realised all the levels of Yungdrung Bön of sutra, tantra and dzogchen (Tib. mdo ngags sems gsum) as well as all traditional arts and rituals. The main Protectress of Yungdrung Bön, Machog Sipai Gyalmo (Tib. Ma-chog Srid-pai rgyal-mo) appeared to him many times and he had numerous visions of yidams (Tib. yi-dam) and great masters of the past from whom he received teachings, instructions and initiations. He manifested many miracles such as writing with his finger on rock, flying in the air, and showed many other signs of his attainment. He wrote many treatises and commentaries. The main Protectors of Yungdrung Bön (Tib. Ma Bdud Btsan Rgyal) served him and accomplished all the tasks he gave them without delay. Thus he was able to restore Yungdrung Bön in Central Tibet and laid the ground for its further expansion.

On the third day of his passing, his corpse rose one cubit in the air above his meditation seat but his spiritual sons prayed for it to remain as an object of worship so it came down again. During the cremation, rainbows formed on all sides and a mystical eagle appeared from the rainbow in the West. Having circled the cremation site three times, it flew towards the West.

Featured image of the thangka courtesy of Khenpo Gelek Jinpa