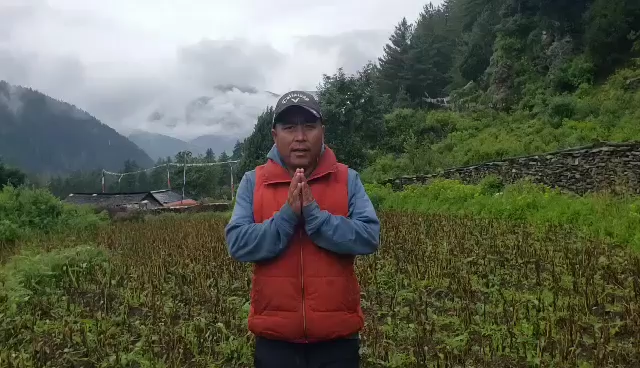 Yesterday one of our Trustees, Paola Malatesta, received this short video from a friend from Dhorpatan, Nepal and we immediately decided to help.

On top of hardships caused by corona virus, the farmers in this mountainous region are now faced with huge swarms of hungry locusts that have descended on their villages and are destroying their crops.

The local people here depend on potatoes for food and trade. Ethnic Tibetans who settled on the mountain slopes exchange potatoes for rice and wheat in the Nepali villages lower down the mountain, and in the summer months the men usually go to work and trade in Dolpo and other regions. Of course, corona virus stopped them moving for work. And now the locusts have destroyed most of the vital potato crop. This means the villagers will be very short of food this winter. But also, they will not have seed potatoes to plant for next year’s harvest.

They all need our help to make it through the hard Himalayan winter and replant their crops next year after locust swarms destroyed their fields.

We are running the Help Dhorpatan fundraising campaign for one month starting today 15 July 2020. You can donate via HELP DHORPATAN button or make a direct transfer to:

FOUNDATION FOR THE PRESERVATION OF YUNGDRUNG BON

In mid-August all collected donations will be transferred to Triten Norbutse Monastery, Kathmandu, and marked Help Dhorpatan. The monastery’s  Nyerpa will then oversee the administration of food and other necessities to those most in need in Dhorpatan.

We look forward to updating you on the progress of this campaign! Please donate generously to help our friends in need!

Dhorpatan was the earliest settlement for Tibetans exiled from Tibet during the Chinese invasion. Nordzin Ling was founded here in 1960 and the 32nd Abbot of Menri Monastery, Sherab Lodrö, started the first Bön monastery in exile, Tashi Geggye Thatenling.

According to the Food and Agriculture Organization of the United Nations, the desert locust (Schistocerca gregaria) is considered the most dangerous of all migratory pest species in the world.

“A swarm measuring one square-kilometre in size contains about 40 million locusts, which can eat the same amount of food in one day as about 35,000 people,” says the FAO.