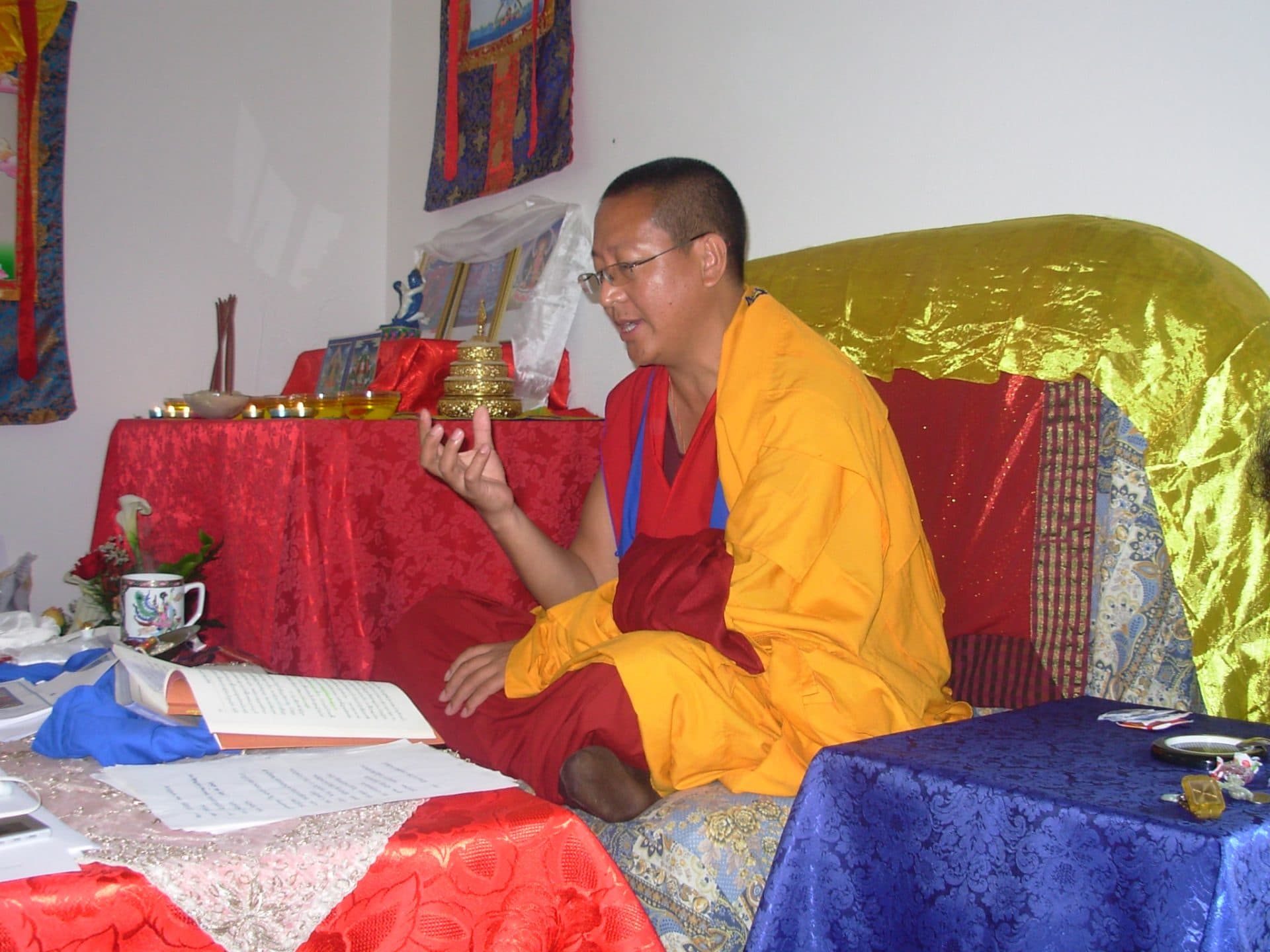 NAGRU KHENPO GELEK JINPA was born in Kham, East Tibet in 1967. He grew up in a nomad family, spending his childhood much as any young Tibetan would, tending the animals and working on the farm. Geshe Gelek also attended a local school, where he learnt to read and write. In 1986 H. E. Yongdzin Tenzin Namdak Rinpoche visited East Tibet, and it was then that Geshe Gelek made up his mind to take vows from him and become a monk; he was nineteen at the time.


As a novice, he began his monastic studies in Thongdrol Ritröd Monastery, starting with the Preliminary practices, and going on to receive teachings on Dzogchen as well as many other aspects of the Bön tradition. He later stayed in Tsedrug Gompa for a year and studied philosophy with the renowned scholar Lopon Drangsong Yungdrung in Lungkar Gompa for two years. Geshe Gelek completed several personal retreats, including a 49 day dark retreat and a 100 day Tummo retreat. He also practised Trekchö and Thögal.


In 1988 he began studying Bön philosophy, alongside Tantra and Dzogchen. Having begun studying Bön philosophy in 1988, Khenpo Gelek decided to continue his studies with the great Bön masters in exile in India and Nepal. In 1992 he managed to travel from Tibet to Nepal where he spent some time with Yongdzin Lopön Tenzin Namdak Rinpoche before transferring to the new Menri monastery in Dolanji, India, where he continued his studies under the guidance of 33rd Menri Tridzin Lungtok Tenpi Nyima Rinpoche.


In 1994 Khenpo Gelek returned to Nepal to the newly-established Triten Norbutse Monastery where he was able to receive many extremely important Dzogchen teachings from Yongdzin Lopön Tenzin Namdak Rinpoche. It was during this time that Khenpo Gelek began researching and writing his own books, including a treatise on Bön Vinaya, the History of Zhang Zhung (currently being translated into English by Prof. Charles Ramble), and the Bön Kangyur (canon). The latter was published in Nepal in 2001.


From 1999-2000 Khenpo Gelek collaborated with Prof. Nagano of the National Museum of Ethnology Osaka, Japan and Prof. Samten G. Karmay of INRS on a major project to catalogue the Bön canon.


Khenpo Gelek received his Geshe degree from Triten Norbutse in 2001; his class was the first to graduate in Nepal for many centuries, and the final exam were held in the presence of Kyabje Lungtok Tenpi Nyima Rinpoche, Kyabje Yongdzin Lopon Tenzin Namdak Rinpoche and Khenpo Tenpa Yungdrung. Like the others in his class, Khenpo Gelek received his degree certificate from a representative of H. H. the Dalai Lama.


Later that year Khenpo Gelek was invited to France by the Kalpa Group to participate in a scientific study of Tummo for Harvard University, USA. Together with two other Bönpo monks, he completed a full 100 day retreat during which he was monitored regularly by physicians and scientists to establish the physical effects of this practice of inner heat. It was during that time that Geshe Gelek struck up what was to become a lasting friendship with Dr. Charles Ramble, then head of Tibetan and Himalayan Studies at Oxford University, UK (now professor at École Pratique des Hautes Études, Paris).


In 2003-2005 Khenpo Gelek collaborated with Dr. Ramble and the Kalpa Group on research into the history and culture of Zhang Zhung, and this led to a fieldtrip in the Mount Kailash region which culminated in the production of a documentary film In Search of Zhang Zhung and a book The Sacred Landscape and Pilgrimage in Tibet: In Search of the Lost Kingdom of Bön, Abbeville Press, New York, London, 2005﻿﻿.
﻿

Further research followed in 2008 when the newly-formed Bönpo Mahasangha of Nepal, headed by Khenpo Tenpa Yungdrung, asked him to undertake a survey of Bön peoples, temples and customs in various regions of Nepal. This led to the production of a documentary film Hidden Treasure of Bön: Secrets of Mustang﻿ as well as a book, BÖN IN NEPAL: Traces of the Great Zhang Zhung Ancestors – The Light of the History of Existence.﻿﻿

In 2003/4 Khenpo Gelek studied English in Oxford and in 2008 he was invited to participate at Hope University’s Big Hope conference in Liverpool, UK. He has made invaluable contributions to several recent publications, such as Masters of the Zhang Zhung Nyengyud, Heart Essence of the Khandro: Experiential Inistructions on Bönpo Dzogchen – Thirty signs and Meanings from Women Lineage-Holders  and other yet unpublished texts.


Since the establishment of Shenten Dargye Ling, Yongdzin Lopön Tenzin Namdak Rinpoche’s international centre in France, in 2005, Khenpo Gelek has spend many months based in Europe; he travels regularly to teach a growing number of students throughout Europe, as well as in the US. His lively, energetic teaching style and easy-going, compassionate nature are much appreciated by his Western students.


In 2013 he was inaugurated as Khenpo (Abbott) of Shenten Dargye Ling at a ceremony held in Triten Norbutse Monastery, Kathmandu.